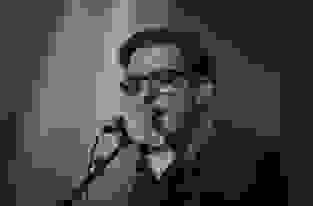 Back In Town - Adrian T Bell

Back in Town is the second single to be lifted from “Navigator”, by the Newcastle upon Tyne born, Prague based musician and painter Adrian T Bell.  It is released on the 12 of March 2021 and coincides with a virtual showcase of his paintings.

After two solo albums, Different World (Apollo award for the album of 2014) and Night and Day, Adrian T. Bell and his band, The Sleeper Agents, give us an album that tells of the dilemmas of the contemporary man in the modern world. A man who would like to conquer, save, or maybe escape the world, but the mundanity of everyday life offers routine -  paying bills and permanently unclogging pipes.

"My grandfather worked as a policeman during The Blitz in London and was busy working to save lives," says Adrian. "I went to the Navy at the age of sixteen, and travelled the world.”  Such opportunities for fulfilling the male-minded self-realization are increasingly difficult in the European metropolis. Navigator addresses such dilemmas, and perhaps offers a moment of escapism. Every one of us dreams of doing something different and we as “sleeper agents” are waiting for that moment when one day, we hear the phone ring and are given an order to perform some task that should fulfill us.

Navigator was created in collaboration with American music producer Sylvia Massy, ​​ The album was recorded at the famous La Fabrique studio in Saint-Remy de Provence and the Faust Studios in Prague.

Collaboration with a new music producer has brought new experiences. Adrian added "Sylvia has a lot of ideas and very unconventional sound experiments, but the resulting sound preserves the authenticity of the demo recordings. That's exactly what I thought, "When I learned that Sylvia, a renowned and highly sought-after producer, agreed to my collaboration offer in January, it took me a while to believe it. Sylvia’s condition was that I must write one song each day. And so I composed, under pressure,  It was invigorating and as a result, most of those demo recordings eventually hit the record. "

The result is nine strong tracks  There is still a post-punk feel but Adrian also speaks about the cinematic quality drawing inspiration from Motown, Funk, Pop, Rock and country. The album was recorded in a number of Prague's churches and in the recording studio - the organs are from Saint Salvatore and bells from the Saint Vitus.

Adrian is from Newcastle upon Tyne, and since 1992 he has lived with his family in Prague. He studied Landscape Architecture, in Prague and then a Creative Director in Advertising.

Adrian is the former lead singer of the post punk group The Prostitutes, the band Filter magazine awarded ‘best band of the year 2007.

Massey is holder of dozens of Gold and Platinum awards, whose collaborations include Johnny Cash, Prince, Red Hot Chilli Peppers and Tom Petty and the Heartbreakers.